The 10th International Conference on Data Integration in the Life Sciences 2014 (DILS2014) will be held at Instituto Superior Técnico (IST).

The conference will start on July, 17th and will take place at the “Salão Nobre” located on the 1st floor of “Pavilhão Central” (see map below).

There will be a visit scheduled to Alfredo Bensaúde Museum at 6:45 PM (see map below).

The Welcome Reception will take place on July, 16th from 7:30 PM to 9:00 PM at IST Garden near the Kindergartner (see map below). 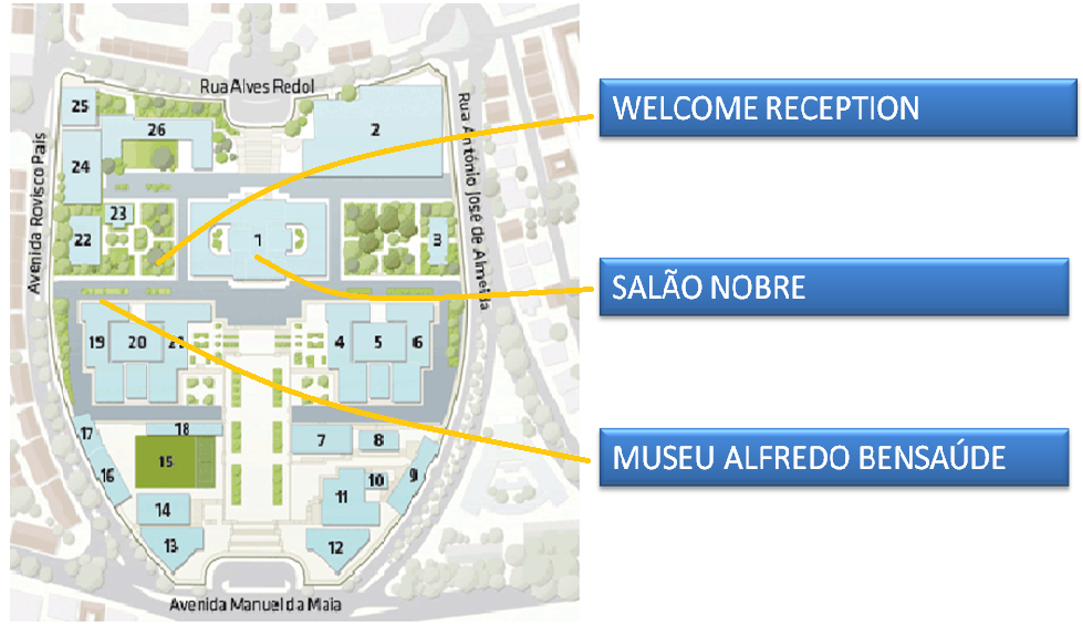 How to reach the Venue

From Lisbon airport you can take a taxi straight to the Alameda campus. A taxi ride will take about 10 min. and cost around 10 EUR. Alternatively you can take the Aerobus 91 shuttle which will take you to the Saldanha Plaza (see above map). From there it is a 5 min. walk to the campus. The on-board fare for the shuttle is 3,50 EUR.

The Instituto Superior Técnico (IST, http://www.ist.utl.pt/) is the largest and most reputed school of Engineering, Science and Technology and Architecture in Portugal. Since its creation in 1911, IST’s mission is to provide top quality higher education, as well as to carry out Research, Development and Innovation (RD&I) activities according to the highest international standards.

Today’s IST is recognized as a Great School of Engineering, Architecture, Science & Technology, in Portugal and worldwide. IST is involved in some of the most prestigious RD&I and technology transfer institutions in Portugal, with remarkable impact internationally at many scientific and technological domains. A vast number of courses in cutting-edge engineering areas, at undergraduate, Master and Doctoral levels, are nowadays offered at IST. IST is also actively involved in several networks and international programmes to promote student mobility, both at undergraduate and postgraduate levels. Through a large number of agreements with other institutions worldwide, IST participates in more than 20 Dual Master programmes, and joint PhD programmes with MIT, CMU, UT-Austin, KTH and EPFL.

Other important facts about the history of IST can be found in
http://www.ist.utl.pt/en/about-IST/history/.

INESC-ID is one of the most dynamic research institutes in Portugal in the areas of electronics, information systems and telecommunications. The institute integrates a body of highly qualified researchers, which includes more than 80 with a PhD degree, as well as a large number of post-graduate students. The majority of the senior researchers are professors, most of them from Instituto Superior Técnico, but also from other Portuguese universities. This body of researchers, unique at national level in its scientific area, enables INESC-ID to act, in an effective way, in the different phases of the R&D process. The intense activity developed by INESC-ID since its inception resulted, up to now, in more than 1700 scientific papers published in specialized journals and international conferences, dozens of industrial prototypes based on state-of-art technologies, as well as a number of patents and awards. A number of high-tech spin-outs have also been created based on technologies and products developed at INESC-ID.

Located in the center of Lisbon, the Alameda campus is well served by a public transport network of city buses and an underground subway system which reaches out to the outskirts of the city.

The following buses stop near the Alameda campus:

There are two subway stations near the campus, one on each side. At each station two subway tunnels connect:

For further information such as timetables and fares visit the Carris and Metro de Lisboa websites.